We have fixed the signup form for shares, so please resubmit your 2018 submission! 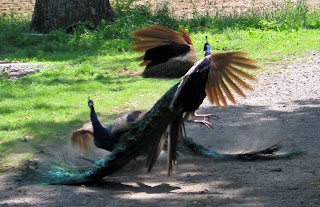 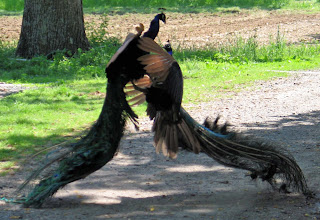 Here I am at the farm. Upstairs in my office and, looking out the window, right there, in front of the house, I see two grown ups in a fight.

Not, unlike two pre-teen boys, they’ve been circling each other for a while now, and then suddenly one of them makes a quick move and strikes out at the other. And this is not like the pre-teens who aren’t serious about fighting.

Both of these characters are serious, and quick. I see the movement, but I can’t tell what was accomplished.

Was one of the two struck, hard. or was it just a feint. A maneuver to intimidate the other.

It was so quick. I can’t really tell what went on but for a second they are on the ground and then up on their feet again and circling.

I can’t believe it.

This might be something you see in the city, living in an apartment in maybe not the nicest neighborhood in a place with a lot of people walking up and down the sidewalk.

I know, I’ve seen this sort of thing before. Way back when, when, after I came home from Vietnam and got out of the army, I worked for part of a year as a medical tech up at Johns Hopkins and lived down in a less than nice part of the city. Baltimore.

Back then I saw things like this out my apartment window.

Or maybe out in the suburbs with pre-teen age boys. I saw some of that a couple decades back when I did my time teaching middle school.

But this is a farm and you can spend the day sitting on a boulder down where our road forks by the creek and not see a single person come walking by.

But before we give the who, what, where when and why of the fight lets go over the farm news first.

Egg shares are available. Susannah wrote back saying she does have thirty dozen eggs for us. If you do not have an egg share yet but want one send me an e-mail and I’ll sign you up.

Last year it started raining on April 15th and for all practical purposes it didn’t stop until June 15th (45 days of rain out of 60 days) Then we went into drought mode.

This year the rain isn’t particularly remarkable. For April we had just over an inch where for growing vegetables four inches a month is a desirable rainfall.

However, this year it’s the temperature that is out of whack.

This year we had more days of frost in the second half of April (April, 18th, 28th and 29th) than we had total in the preceding twelve years.

The number one rule of growing vegetables. You can not grow vegetables when the temperature drops below freezing.

Finally, this last week, the weather settled down enough to plant.

We now have the onions, potatoes, broccoli, cauliflower, pac choi, cabbage and an interesting type of cauliflower, a Romanesco, in the ground.

Friday we hope to plant the tomatillos, ground cherries, Italian and Thai basil and celery.

And next week, as long as there’s no rain we hope to empty out the greenhouse and fill up the fields.

And I guess that’s enough about the farm and we can get back to the fight.

This was another case of running to get the camera.

This time I knew where the camera was.

Out on the driveway was our peacock and a stranger. Another male, fighting it out.

Two peacocks circling each other, their heads close down to the ground and then suddenly both birds up in the air, wings flapping talons reaching.

But we don’t have two peacocks.

And none of our neighbors have peacocks.

So where did the stranger come from?

We have one peahen. And one peacock.

And the peahen has not been seen for almost three weeks now. During the day she is not roaming the farm. And at night I don’t see her up in one of her usual trees, roosting.

She could have come to harm, however, I suspect, she is somewhere, off in the woods, sitting on a nest of two or possibly three eggs.

She’s done’ this before.

Four years ago she was gone for over a month and came back with a pair of young peafowl.

One of the pair disappeared during the first month but the other followed his mother around all summer long.

We really had no idea what sex the young bird might be but the next spring he blossomed into a young, immature peacock. And while his tail wasn’t anywhere near the length, or beauty of his father’s it was clear what he would grow into, given the time.

That second summer he kept close to his mother. Following her from one end of the farm to the other. At night sleeping high in a tree on a limb next to her. Always, it seemed, keeping her in sight.

The next year was different.

The next year his tail grew into that of a grown up. Still not as magestic as his father, but he didn’t seem to realize that and in the spring, with his newly grown out fan of feathers he spent his time trying to entice his mother (seeing that she was the only other female peafowl on the farm.

Of course she was not interested. Even though she had been a devoted mother and had taught him what she had to teach about the world, this year her interest in his development waned.

And not only that, but his father suddenly ‘changed his attitude towards his son from bland indifference to cold hostility.

And then one day the young male was gone.

And hadn’t been seen again… until Today?

Now, I don’t know who that other peacock is, I don’t know if it is, in fact, the missing son. or if it is just another rambling peacock, kicked out of his home territory, looking for a new home.

Actually, our first peacock, the one we had well over ten years ago came to us in just that way.

One day we were up on our mountain, hiking with some friends from the city, when one of the women looked up and said. “There’s a peacock.”

Where upon I immediately told her. ‘Where? You must be imagining it. There aren’t any peacocks around here.’

The next month we were out walking on our driveway when we heard that sound. The one, if you’ve ever heard it, you’ll know, means there’s a peacock around. A sort of cross between a strangled goose and an air raid siren.

It was our friends peacock.

Shortly after that we started feeding him. Grain left in a pan a hundred feet back into the forest.

And after he got accustomed to eating that. The pan was moved to 80 feet. Then 60. Forty. Twenty and finally at the edge of the forest underneath that old maple tree. up by the hoophouse.

That’s as close as we could get him down to our house.

No matter if we stopped feeding him in the woods but left a pan of feed on our driveway halfway down to the house he wouldn’t venture out of the forest.

Wenonah came up with the idea. “It’s simple. Let’s get him a girl. or two.”

And I did. I kept my eyes open for just such a thing in the classified ads and finally I found a park that wanted to get rid of its unruly peafowl.

They wouldn’t stay inside the park boundaries but insisted on roosting on the roofs of the neighboring houses.

So we acquired two tamed peahens and let them go in our chicken yard. Plenty of food, a sheltered henhouse if they wanted to go in out of the weather at night.

And no sooner had I let them out of the cage I used to transport them home from the park then our peacock came waltzing down to our house. Displaying his feathers just like he had always lived there.

And after a day or two, after he had thoroughly impressed the two peahens with his full set of tail feathers he attempted to move his new found love interest back into the woods.

And they followed. and stayed for a night. But the second night they were back in the chicken yard. these weren’t wild peahens. They were peahens accustomed to all the amenities of civilized existence.

Rouging it was fine for a night. but after that they preferred grain available on demand and a structure to keep the rain away at night.

It didn’t take the peacock long until he surrendered and followed the peahens down to the farm where he lived, spending the night on our roof until one afternoon a thunderstorm came over the mountain and he flew, followed by one peahen for the shelter of our roof.

Only that was the day the storms lightning choose to strike our house, blowing all the fuses in the box and burning the circuit in our phone.

We found the peahen and peacock behind the house. Lifeless. Their feathers scorched.

Tonight, as I was finishing up the newsletter, the last I saw of the peacocks, several hours ago, both peacocks are still at the farm.

One is up the hill roosting on top of the new hoophouse.

The other is up on a limb of the old locust tree by the herb garden. Roosting for the night.

What do you think?

Will both peacocks still be here when shareholders come out this Sunday for the farm open house?

What do you think?

Tons of photos from the Hauters and our members. If you have photos to share, please let us know or post them on Facebook and tag the farm.

Members are welcome to come out and hike or even help with the farm on certain days. Check here to see what events are coming up at the farm.

We love visitors, but we have a few bits of information before you head on out to the farm. We have regular open farm days throughout the season.

Your first year in a CSA program can be a bit daunting. What do you do with these new vegetables? Our recipes section is ready to help you.